Did you know that just over the New York border, there is a delightfully thriving wine country? I had heard rumours of this magical area, but was still surprised at the variety and number of vineyards to be found here. Normally, we think of Italy or California for wines, but I must say that Canada is home to some very unique and delicious vineyards and varieties too.

In fact, I enjoyed my trip here in October so much that I went back in April for another weekend of wines and exploration! Both trips, I was accompanied by my friend Kiley Mcretton, and in April we were also joined by two more friends, Chris Moses and Jenn Ellison. We used groupon packages for both of these trips, as we found great budget deals that included most of these excursions.

Now, there is so very much to do in Niagara, but for today I want to focus on the wine tastings I had the pleasure of partaking in. I’ll go through a few of the places we visited one at a time. All three of these I revisited on my second trip! Please not that these are in no particular order. 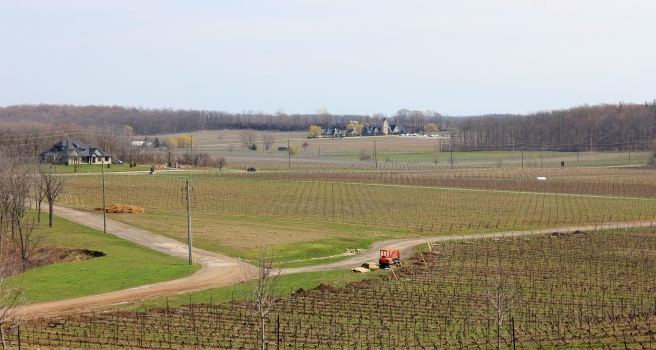 When you turn down the twisting drive, and up the hill to the main building, you are greeted with an expansive view of the twisting grape vines. In October, there were grapes hanging off the vines still. The building itself is both imposing and somehow cozy, with a feeling like you have stepped into an over-sized cabin due to all the natural wood in their furnishings. The walls are nearly completely floor-to-ceiling windows and you are greeted with plenty of natural light. Of all the vineyards, this was my favorite one architecturally.

Now, on to the wines. Oh, the wines! They have decidedly fun names for their wines, titles like “The Big Kahuna” and the “My Way Chardonnay” and very uniquely eyecatching, almost minimalistic art on the bottles. Kiley and I enjoyed the wines here so much that we stopped in twice during our October visit, and then again in April! It’s a darn shame they don’t ship to the USA, but I’m sure we’ll be back up there sooner rather than later. My favorite so far is their very deep and vibrant red wine, “Bravado” a cabernet sauvignon that really packs a punch! I brought a bottle of this home with me in April, and I still haven’t brought myself to open it just yet. I think it will pair nicely with a steak dinner.

Trius is another winery that we visited on both trips. There are several buildings, including a restaurant and a separate wineshop where the tastings are offered. There were many beautiful flowers and you certainly feel like you’re stepping into a luxurious estate, the feeling being hampered only by the large number of other visitors here!

Despite this, the staff are delightfully friendly and attentive. I must admit that I enjoyed our April visit more, though I think this may have been due to fatigue in October! However, I fell head over feet in love with a very flavorful Icewine here in April. Trius specializes in this particular type of wine, which involves leaving grapes on the vine past the fall, and picking them after several consecutive freezing-temperature nights. It is a process completely impossible in most areas of the world, so it is rather unique to this region. Prior to this visit, I did NOT enjoy Icewine. I found it syrupy and sugary with little redeeming flavor. However, I am always willing to give something a second try and I am so very glad that I did. Their 2015 Cabernet Franc Icewine (pictured above) stole my heart in a sip with it’s elegant and smooth flavor. However, I could not stomach the price tag ($85 canadian) and had to drag myself away. Perhaps next trip, I will budget myself for a bottle.

They also offer up another very interesting style of wine, “wild ferment” as a chardonnay and a cabernet sauvignon. These wines are allowed to ferment with no additional yeast added. This is the only wine I have tried that is processed in this manner, and I must say it adds a certain depth to the flavors. Both are very enjoyable to sip on.

Our experiences at Konzelmann differed vastly between October and April. Our voucher was for a tour that ends with a tasting. Our guide in October was not very well-spoken, and said many things that were flat out wrong about the wine-making process. Still, he had a disarmingly friendly demeanor and was quite handsome, so it wasn’t all bad! The tasting was done inside the fermenting room, off a fold-out table. We were a little put-off by this whole experience, but still opted to return during our April trip, which resulted in a completely different and fantastic experience.

The building itself feels like a small castle, and when you learn that the original proprietors moved to Canada from Germany, it makes perfect sense that they would design such a beautiful and yet dominating structure. The land sits on the edge of a lake, and the slight temperature difference from this affects the taste of the wines they produce. The land was also originally a peach orchard, and some of that remains in order for their signature peach wine to be crafted.

This was actually the first place we stopped on our April trip, and I am wholeheartedly glad for that. Our tour guide (Jay? Jade? Her name is escaping me!) was very eloquent in her descriptions of the wine making process. She led us into a beautiful tasting room after the tour, and spent several minutes explaining the proper way to taste wine, so that we could fully appreciate and enjoy every sip. To be quite honest, I have never been shown the correct way to do this, and her tour really helped us throughout the rest of our trip through other wineries. I am so grateful for that!

The wines themselves were delightful. The peach wine, which on my previous trip I had found too sweet, ended up being my favorite. I’m not sure if it was the same year though, so that may have made a difference. The one I enjoyed was the 2016 vint. I purchased a bottle, which we drank later that night with cheese and crackers.

Have you been to the region? Do you have a favorite vineyard that I should visit next time? Please leave me a comment about your experiences in the Niagara Wine Region! Cheers!

Hey readers! Did you know that I have a youtube channel now as well? I would greatly appreciate you checking that out as well if you have a moment! My channel has the same name as this happy little blog!  Little Red Roaming Thank you for the continued support! Ciao!